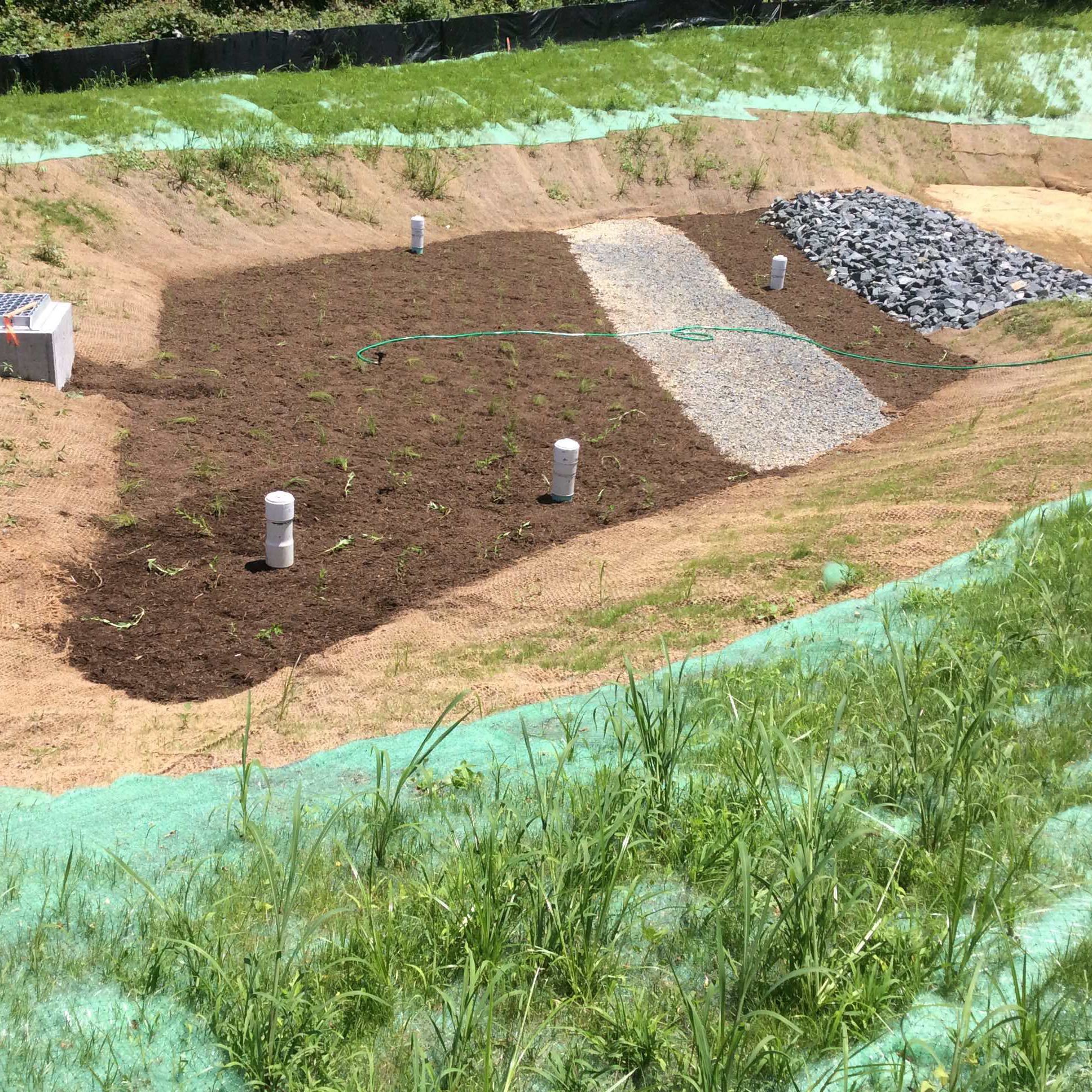 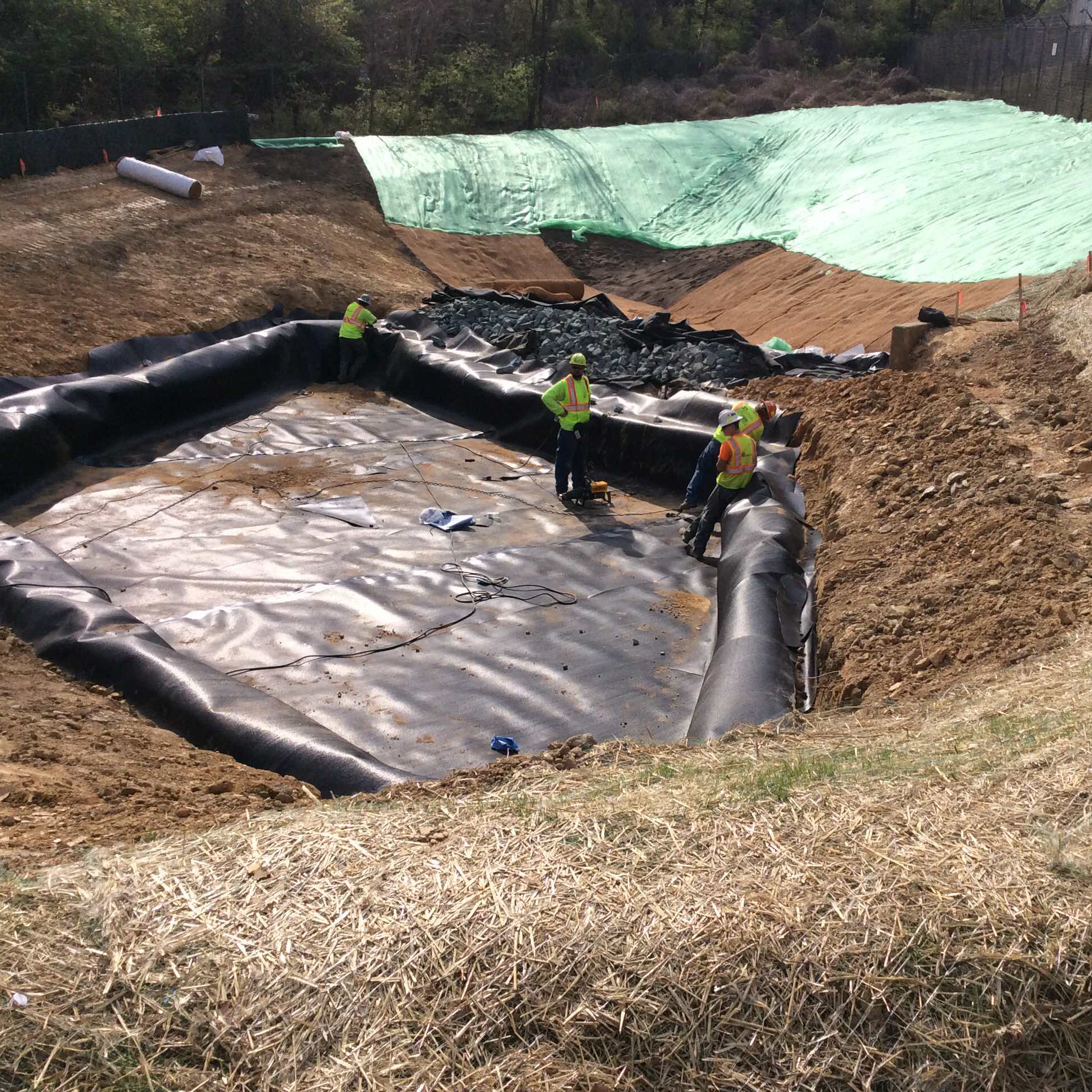 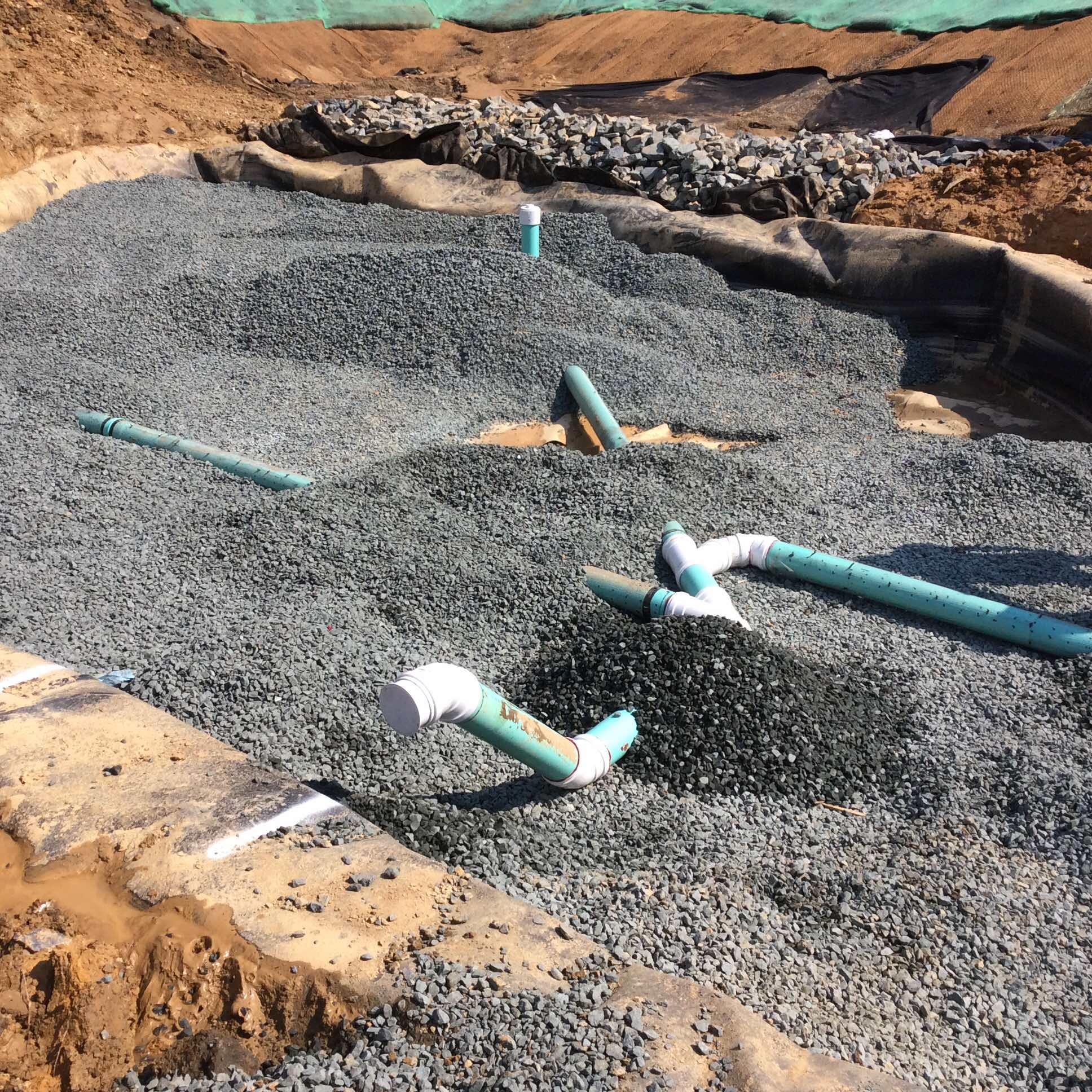 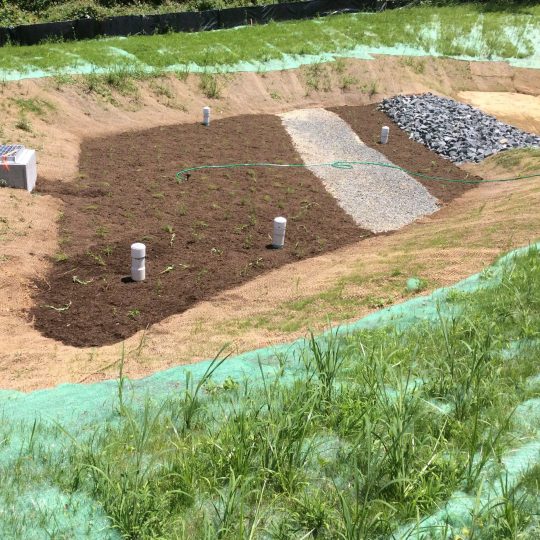 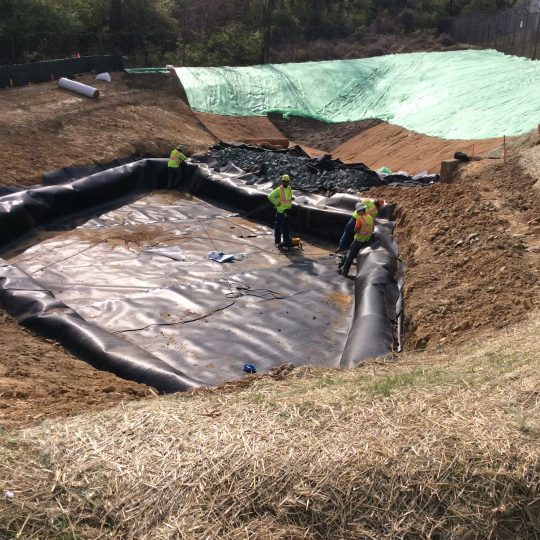 The overall scope of work included turning the existing extended detention structure designed for quality control into 1.49 acres of drainage area, of which .71 acres would be impervious cover. Included in this task was a Submerged Gravel Wetland for Drainage Area 1 that includes impermeable liner, layers of wetland soil, pea gravel, gravel median, cleanouts, observation wells, pretreatment, and wetland plantings as well as a Surface Sand Filter system for Drainage Area 2 which consists of 3” topsoil, 18” clean washed “concrete sand”, 3” of pea gravel before collected by a 6” perforated PVC pipe underdrain system.

This nearly $403,000 project was completed by our team within a 7-month time-frame during the Spring, Summer, and Fall of 2018 – the wettest seasons in recent years. Ferguson Trenching faced many challenges along the way including the current state of the site with respect to wildlife and overgrowth, the unpredicted amount of rainfall, logistical challenges, and adherence to strict protocol by the government contract.

Wildlife
The work area had not been maintained for a number of years, in turn making it home to an abundance of wildlife.  Most of the wildlife like the deer and the groundhogs were consider harmless, but there was a fair share of snakes, chiggers and ticks that the workers needed to look out for and take appropriate precautions. Before we even started work, a job hazard analysis was completed for the clearing and grubbing task. The potential hazards of snake, tick and chigger bites were discussed and the steps to take to alleviate these hazards. Standard Personal Protective Equipment (PPE) of long pants, safety glasses, steel toed boots, hardhats and work gloves were required. The crew was further required to wear long sleeves during clearing and grubbing.

Mother Nature
Weather can be an issue on any construction project. It can affect the materials being used and it can lead to the rescheduling of tasks which can disrupt the overall schedule of a project.

Pond retrofits can be very challenging because most of the time you’re working at the lowest point on a construction site where all the surrounding rain water drains to. You’re always at the mercy of Mother Nature. In our case, she showed no mercy! From the start of construction to the end, it rained. During construction, 49.83 inches of rain was measured. During the month of May alone, 8.92 inches of rain fell. 2018 would go on to become the wettest calendar year on record.

There were many weeks where it seemed like you were taking one step forward and two steps back. Stabilized slopes had to be re-graded and re-stabilized numerous times because of washouts. Pumps ran around the clock to keep areas drained down enough to work. The workers spent countless hours of hand shoveling silt that had washed into the lined pond.   When the weather cooperated, the employees worked longer hours and even weekends to make up for missed days because of the rain.

Logistics
Access to the pond was difficult. A stone haul road had to be built from the roadway to the perimeter of the pond. However, because of the grade elevations and size of the limits of disturbance, that was as far as dump trucks could go. All excavated dirt and aggregate materials had to be “carried” by machine to and from this point, greatly slowing down productivity. The sequence of construction also made things tight on site. Certain areas were required to be stabilized preventing those areas from further being used as space to move materials around site. With the tight quarters to work within, specialized equipment was brought in to convey materials that couldn’t be reached by the standard equipment on site.

In addition to adding an access road to the site, our team had to initiate an environmentally friendly waste management plan prior to any site preparation being completed. It was encouraged by the General Contractor and owner to utilize recycled materials in order to limit the waste produced on site. The site had to be kept clean and organized throughout the entire project.

We also could not interrupt any exiting utility service for any purpose without notifying the owner.

Ferguson Trenching Company successfully completed this project on budget and ahead of schedule.

Proud to be awarded an Excellence Award at ABC Chesapeake Shores’ 2019 Excellence in Construction & Safety awards banquet for this project.