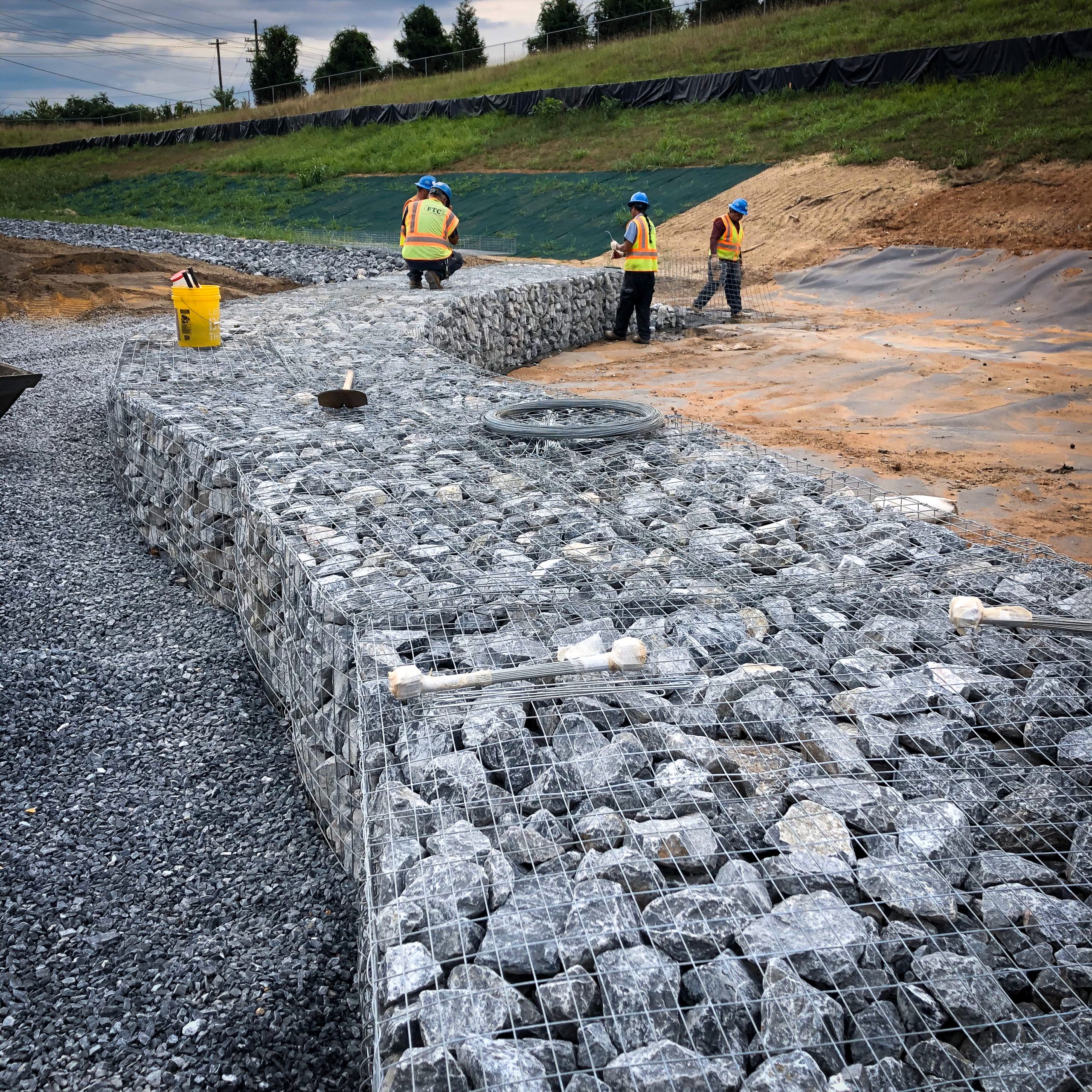 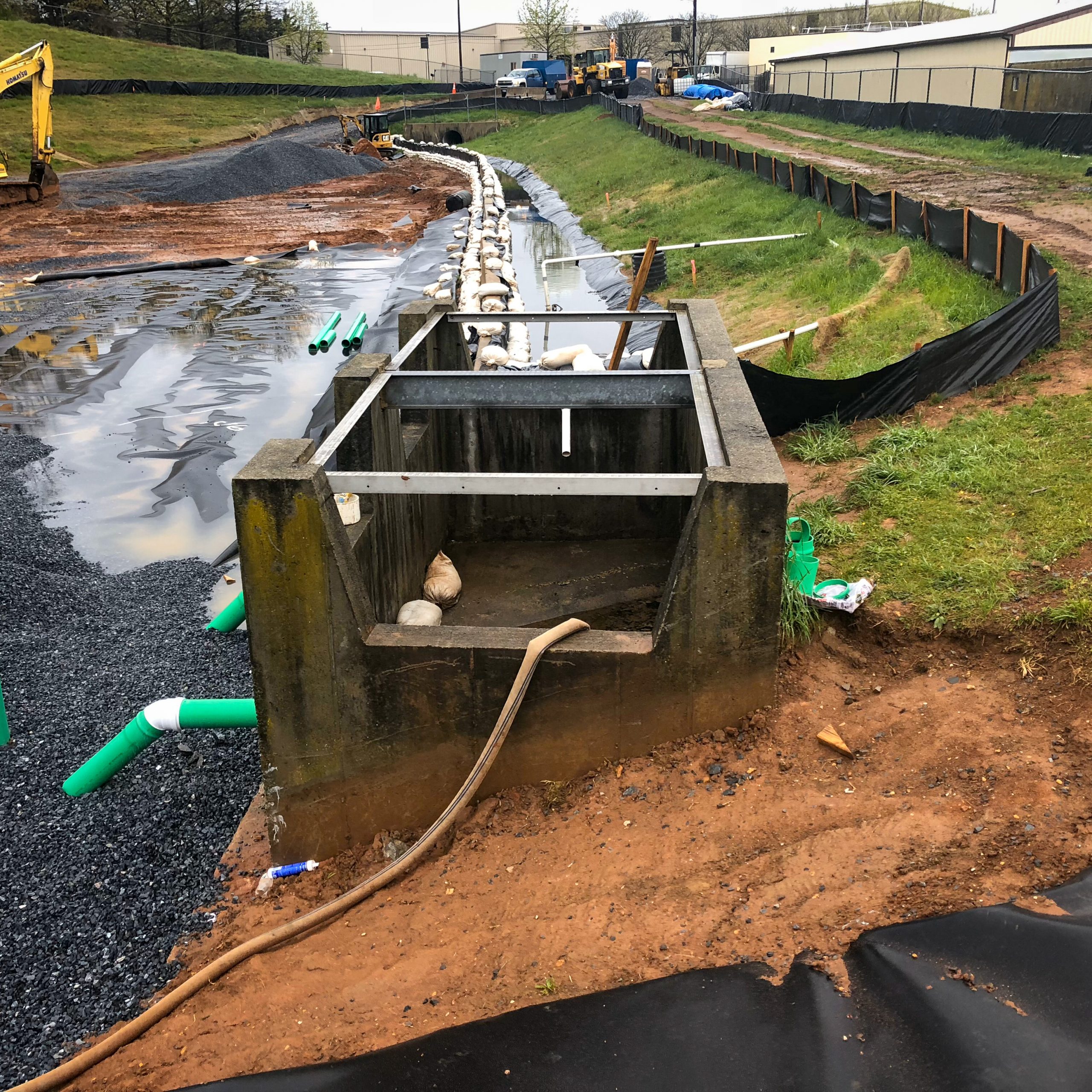 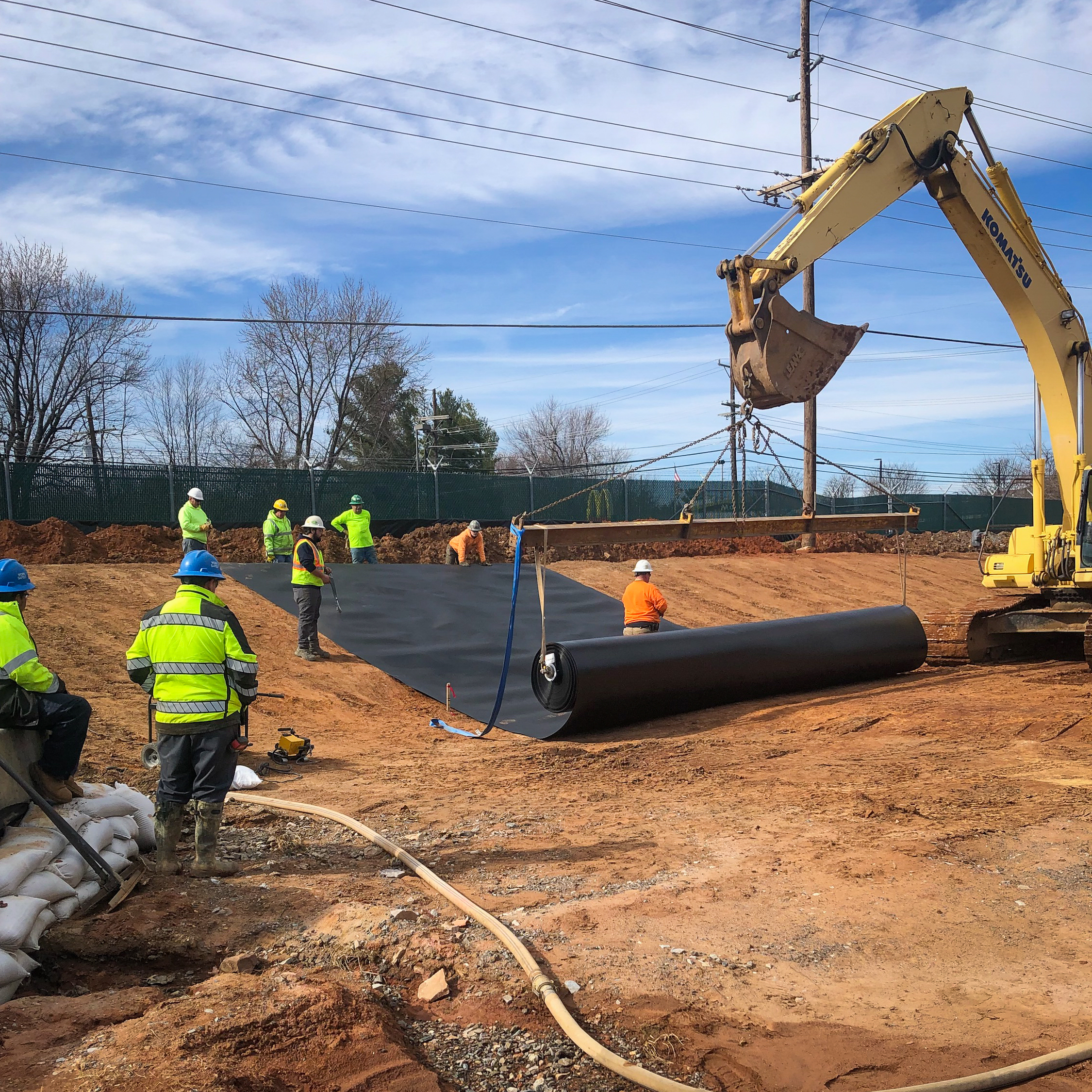 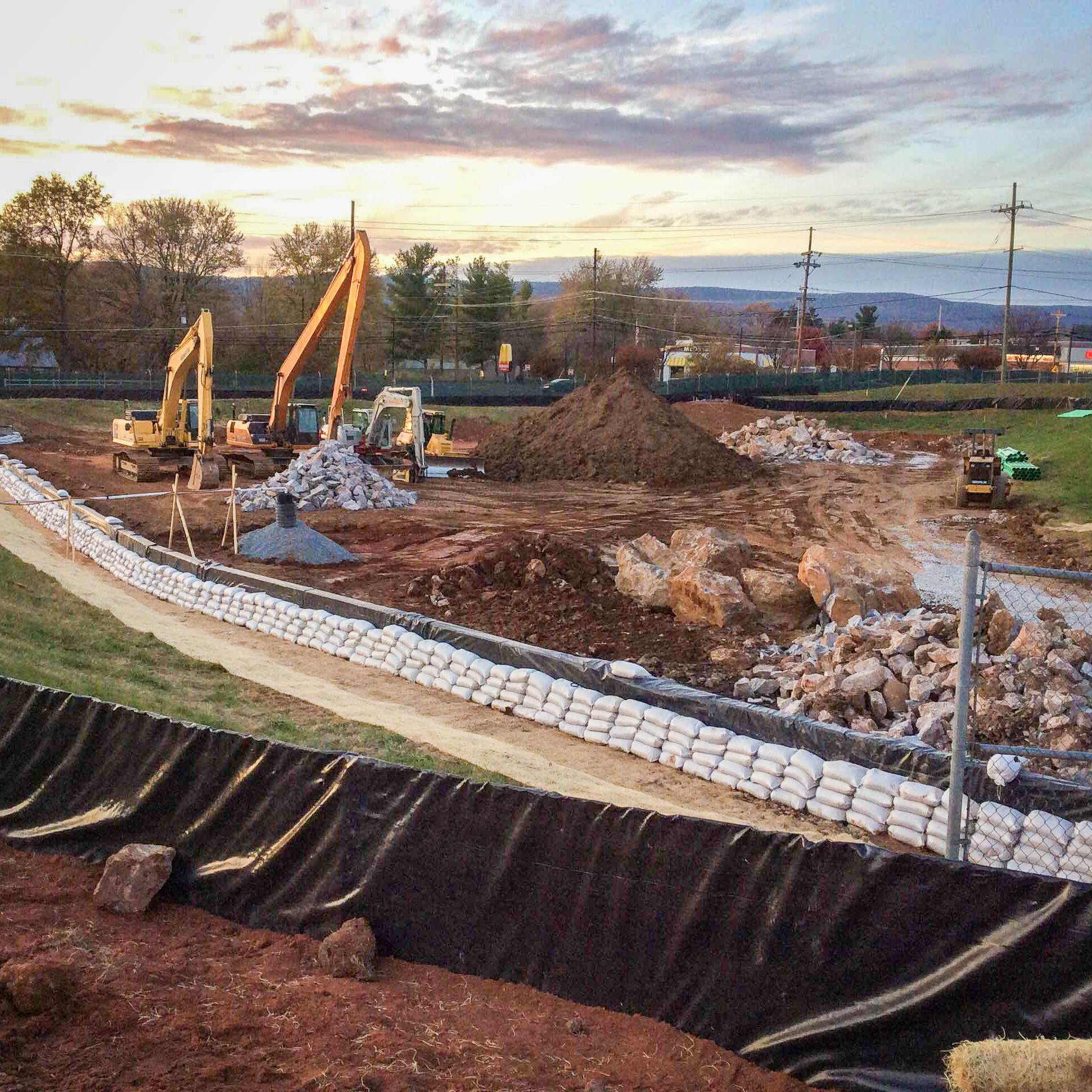 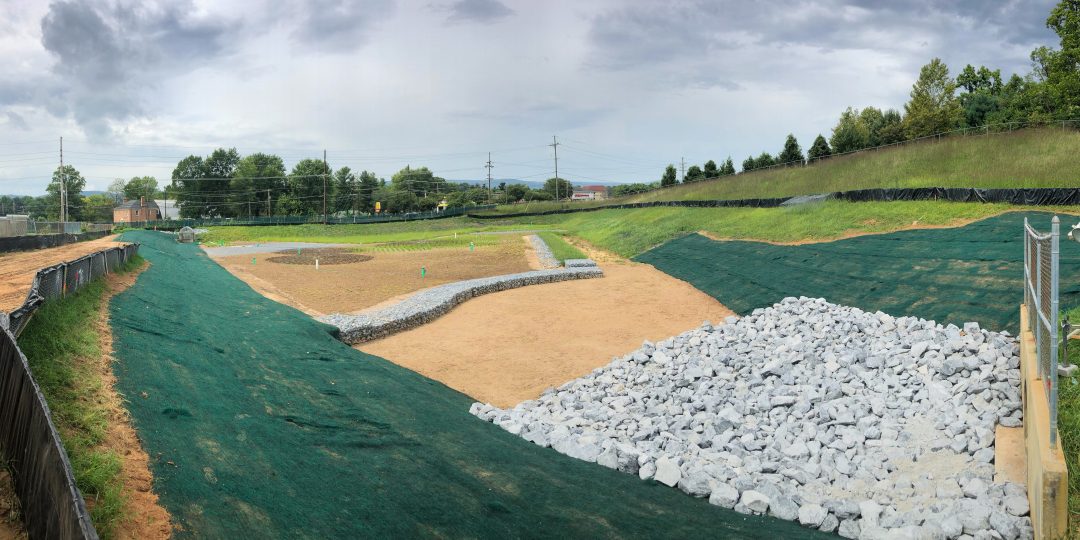 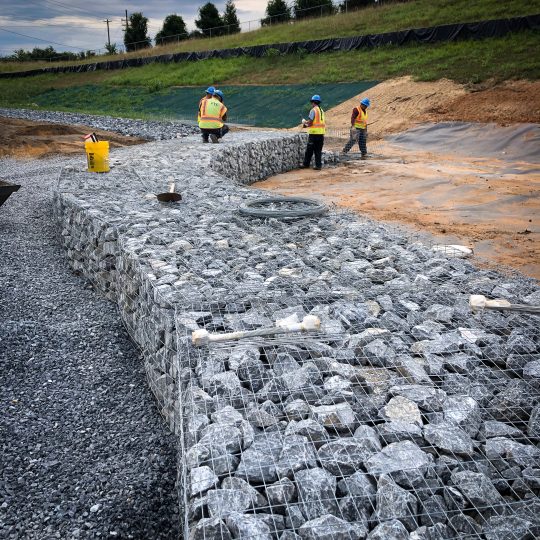 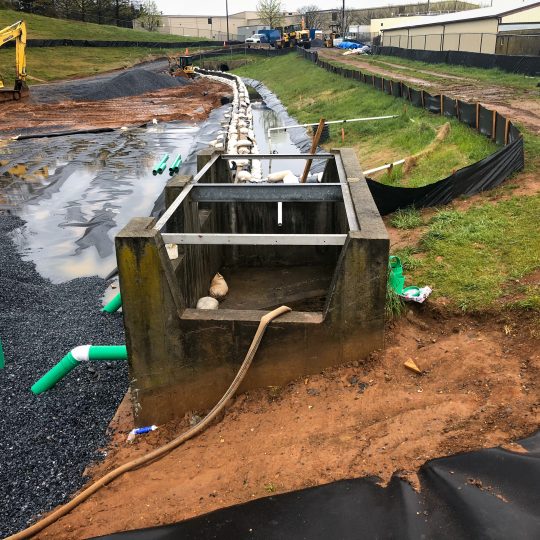 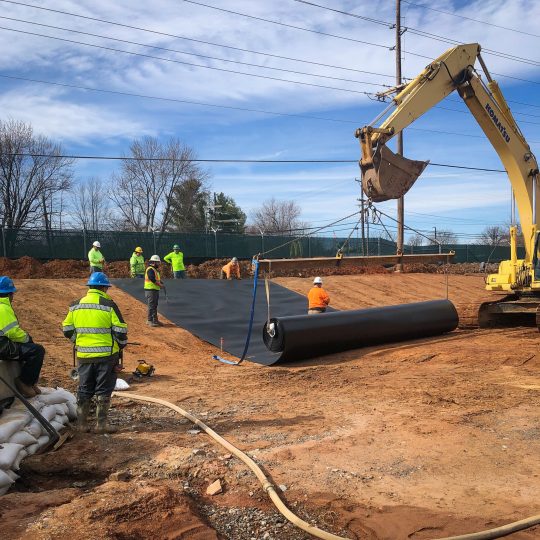 Ferguson Trenching Company was awarded a stormwater management project by Doyon Project Services and the U.S. Army Corps of Engineers (USACE) Baltimore District. This project consisted of converting an approximately 2-acre wet pond to a submerged gravel wetland on the Fort Detrick military base.

The existing stormwater management Pond 1003 entrance is at the intersection of Stark Street and Boyles Street within Fort Detrick. The pond is bordered on the west by the perimeter fence and Rosemont Avenue. The existing stormwater management facility is fenced with 7 feet high chain link fence with a gate. Pond 1003 has a drainage area of 37.03 acres with 13.69 acres of impervious area which consists of roads, sidewalks, buildings, and parking lots. The existing pond lies in karst topography. The undisturbed geology consists of clayey overburden on top of limestone bedrock. The existing Pond 1003 was analyzed for a retrofit that would meet the stormwater quality goals and maximize NPDES credits. The Environmental Site Design (ESD) practice of submerged gravel wetland with impermeable liner, layers of wetland soil, pea gravel, gravel median, cleanouts, observation wells, pretreatment, and wetland plantings was selected. Demolition of the existing concrete channel within the pond and significant excavation was required. The proposed submerged gravel wetland was designed as an in-line practice to treat 1.26 inches of rainfall, which will achieve 14.58 impervious acre National Pollutant Discharge Elimination System (NPDES) credits.

Change Order Delays
The U.S. Army Corps of Engineers awarded the project on September 22, 2017 with a contract completion date of November 30, 2018. The official notice to proceed was given on October 25, 2017. At that time, it was anticipated that construction would start in early February of 2018. Maryland Department of Environment (MDE) was still reviewing the drawings and had not yet issued their NPDES permit. It wasn’t until December of 2018 that MDE returned a set of approved drawings and agreed to issue the NPDES permit. At this point, the contract completion date had already passed and we hadn’t even put a bucket in the ground. The changes on the approved MDE drawings were significant. USACE requested that Ferguson Trenching Company take thirty days to review the changes and submit a change order based on the changes. The changes amounted to over a quarter million dollars. The change order was over twenty percent of the original contract amount, requiring many different levels of Government review. Complicating the issue even more was that funding would need to be found before the work could proceed. Back and forth negotiations took place until a change order was finally issued in August of 2019. Ferguson Trenching broke ground almost two years to the day of the original notice to proceed. It was a good feeling to actually be on site working.

Removal of Limestone Bedrock
Those joys quickly came to an end when it was discovered that the existing Limestone Bedrock was shallower than originally thought. The entire bottom of the pond had to excavated down 18” in order to accommodate the proposed gravel wetland. Complicating the excavation process was the presence of the Limestone Bedrock just beneath the pond surface. Blasting of the rock was not permissible because of its location on a very sensitive military installation. The only way to remove the rock was by using a rock hammer attached to a track excavator. We slowly removed layer by layer of rock until we got to our desired elevation. Over 550 cubic yards of rock was broken and removed from the site.

Seeing that funding of additional changes was minimum at this point, Ferguson Trenching Company suggested a cost saving method that allowed the Government to fund the change order and benefit from the rock being mined. Instead of the rock being hauled off site and paying expensive dump fees, Ferguson Trenching Company foreman, James Knotts talked to the Ft. Detrick landfill supervisor about using the rocks as stabilization for slopes. The landfill was currently importing rip rap from an outside source. By using the rock we were mining instead of the rip rap, we were able to save the Government over $100,000 dollars on our change order alone.

Weather and Wildlife
Prior to our arrival on site the pond was home to numerous groundhogs. Over the years the groundhogs had wreaked havoc on the pond by creating burrows in the side slopes. You had to proceed with caution on the site, as to not step in a burrow and break your ankle. The burrows were everywhere. The base had trapped a significant amount of the groundhogs and transported them to a new home. As part of our contract, we were to “mudpack” the existing burrows to prevent the groundhogs with a point of re-entry. The “mudpacking” consisted of filling and mechanically compacting each burrow with 2 to 3 feet of clay material. While we were not 100% successful in eradicating the groundhogs, the “mudpacking” did help cut the population significantly and allowed for safer walking surfaces for the workers.

Despite the numerous diversions to direct water away from the pond, when it rained there was only one place for the water to go and that was our work site. It was inevitable that reconstruction of the pond was going to occur during the Spring rains. It was up to the contractor to decide the best means and methods to work around Mother Nature and preserve the work site. While we knew we couldn’t stop the rains, our best bet was to implement controls that allowed us to recover from a rain event and return back to work the quickest. Between April 2019 and June 2019 there were fifteen rain events. Because of the effort of Ferguson Trenching Company crews, only five lost work days were realized by those rain events. Immediately after storms crews would begin pumping water to drain the site. Materials were stockpiled on what little high ground we had so that they would be immediately available once the water had drained. The use of track equipment was a must and allowed work to continue through the mud. We also saved rock breaking for inclement days, allowing crews to focus on other activities that relied on dry ground and weather. Where as we could of easily fallen behind schedule (on a project already two years behind schedule), the crews diligence kept the project rolling despite Mother Nature’s best efforts to derail us.

This was a complicated project that had its fair share of issues, but in the end the project was successfully completed, highlighting why Merit Shop Builds Best. MDE and USACE representatives had high praise for the Ferguson crews. This project will ultimately help the environment and serve the Fort Detrick base for many years to come.

In 2021, our team won an Excellence Award for this project at the ABC Chesapeake Shores Excellence in Construction Awards Banquet! See photos here >>